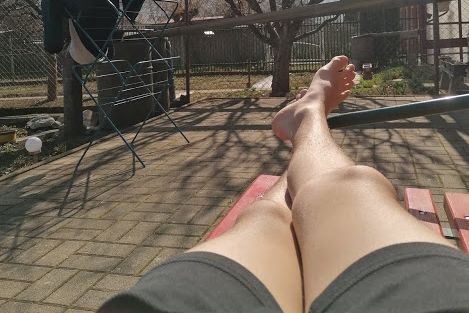 I lost track of what day of quarantine it is after the first week and a bit as there was no point in remembering. It’s been over a month of inside activity for me and I have lost most motivation to do things, mainly getting up early.

Before I go any further I am sorry for the lack of blog posts by me during quarantine, I’ve had no motivation to get these written out.

So what has my quarantine been like. Well during my quarantine I have done garden (backyard) work with mainly my host brother. We have done painting (for 3 days straight), sanding, scraping old paint, floorball messing about in the backyard and just some more little bits and pieces here and there. The other bit of garden work I have done but solo was I scraped all the moss out of bricks lining the start of the garden. This took me about 3 hours however it took me 2 to do not even a third then I found the rhythm.

I have been to the shops plenty of times with my host family and every time I have gone to the shops during quarantine, I have taken a photo of what I have bought, which should be cool to look back on. I have also gone out to the forest with my host family to pick Bear Garlic. We were out for a few hours and you find Bear Garlic on sloped banks right next to a water stream normally. That was a great day out even if I spent some of it being wary of non-existent snakes. Also allowed for a few cool photos. Ever since the start of exchange the amount and quality of photos I have been taking has gone up by a drastic amount. My old phone has a total of 802 about half of those photos were taken between December and the start of February. My current phone has a total of 985 photos and videos taken on my phone, so not including all the photos I have been sent. Now this doesn’t seem like a big difference however I have had my new phone just over 2 months and I had my other phone I had for 3 years. I took more photos in 1 afternoon then I did in probably about a 6 month period.  And the quality has improved 1 because of a better camera, 2 because I am taking so many, 3 I have been learning off the photos my mum has taking over many years and finally 4 I am using the focus, light exposure, angles, and distance to the best of their abilities.

Side note: As of finalising the draft on 16/6/2020 I have 1684 photos and videos on my new phone and that’s just what I have taken. So about 420 photos/videos per month as my phone is only just over 4 months old.

What have I been up to during quarantine alone? I have been spending a few afternoons just lying, chillaxing in the sun. I broke the cracker on my whip at the start of quarantine too, so I haven’t had mine most of quarantine.  I have also been spending time riding the exercise bike I have in my room.  I have been to the shops just down the street twice alone, once so I could get things to make breakfast for my host family the next day and the second to buy some things my host mum wanted. I have gone on 1 walk by myself. I went up a little bit on one of the hills right next to me, about a quarter up so I could look over Rožňava and could also see Betliar (a small town just north). I then went around the hill and back down into Rožňava, into Tesco so I could buy myself something to eat. After that I went over and met up with another exchange student Kelly, so I could see her one last time before she went back home the very next day. We spent about 4-5 hours out and even went over to the Tomkova’s, so they could say goodbye to Kelly as well but from the balcony because Blaženka got tested for corona so none of them were allowed out. After it was just Martina left on the balcony all I could think of was “this reminds me of Romeo and Juliet”.

At my new family’s house, the Leskovjanksy’s, I have been helping out with planting some tomatoes and things, as well as, I’ve been helping Peter with the hail net he is putting up, so far I’ve helped with drilling and bolting the railing together and into the ground. We are putting this up to prevent hail from destroying the grape vines again. Once we finished the hail net we have been building new stairs as the back yard is on a hill and when it rains the bottom gets really slippery and muddy.

Since everything with Corona here freed up about a month ago I have been out with Joshua once to twice maybe even three times every week just hanging. Sometimes we get food others we just go for walks around. Every time we are out something random happens. Its been so much fun hanging out with him this often and I am sad to see him leave. This Corona has caused for Kelly from Taiwan, Martina from Argentina and Joshua from America all to leave which sucks. However I still have memories and photos of the times we had.

This was quarantine and this nearing the end hopefully of corona here.