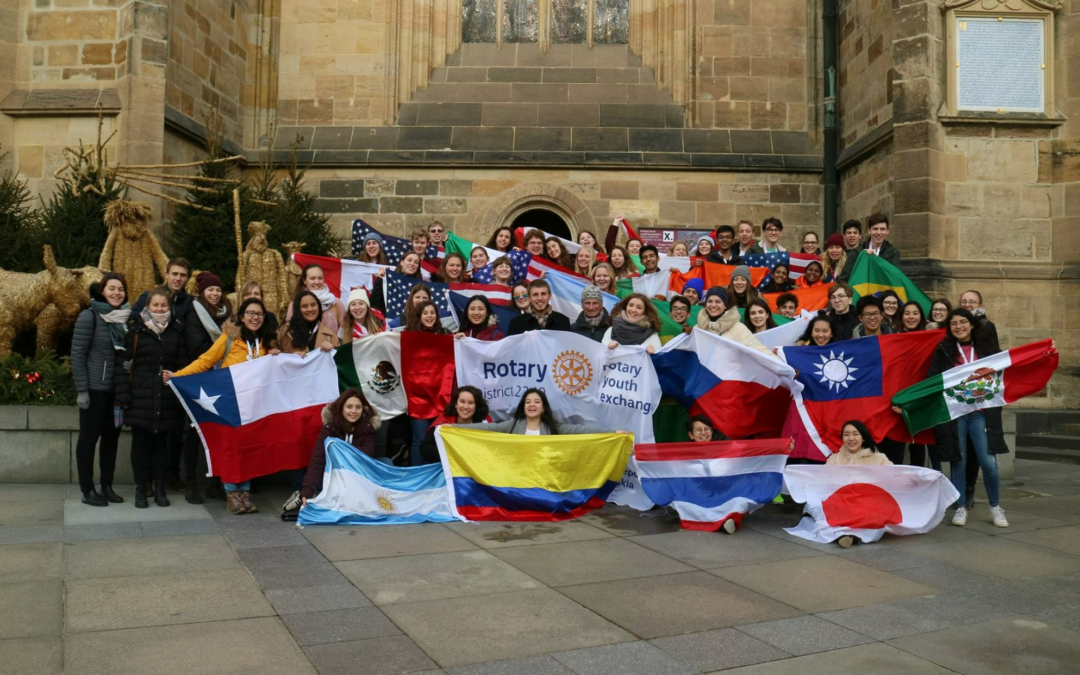 As lunch began on Friday at school, Shri and I got our things together from school and walked to the tram. On our way to the train station to meet the others I had to stop at my mom’s office to get the rest of my things. Shri waited in the lobby while I ran to her office and got my three random bags. Then we got back on the tram and continued on to the train station. Everyone was on time for the first time and I was happy that we wouldn’t have to worry about missing our train.

We all waked to the station together and waited for our train. Since it was a busy time of year to travel you had to pay extra to reserve seats, but we didn’t want to cost Rotary extra money.

There were a ton of people and all of the seats were full, so we didn’t end up getting a seat on the train. First we ended up in the small aisle-way between train cars. We had our stuff piled everywhere and people had to keep squeezing through. After a few stops the lady came through to check our tickets. When she saw where we were standing she got mad at us and told us that there were open seats a few carts down. So we all got our things and slowly squeezed our way down the train. We went a few cars and hadn’t seen any seats, but we came to an open area that was out of the way so we put our things down and ate our snacks. Later the ticketing lady came through the train again and asked us to move yet again since we had chosen the children’s theater seating. There was only one kid that we had seen in the few train cars and he was playing on a tablet so we thought it would have been okay. She asked us to split up and find seats. So we mostly stuck together, and we only had about another hour left on the train anyways. Prague was the last stop on the train, so we all gathered our things and got off.

Rotary told us to go to the central point in the train station too meet rotex (old exchange students) who would take us to the hotel. When we arrived, there were a few rotex and a few other students. A couple of the rotex took our group of students to the tram stop where we all got on a tram to the hotel. When we arrived to the hotel we got our room assignments and met up with everyone who was already there. The rooms had 7 or 8 people in each of them, since each room was two rooms sharing a bathroom. In my room was Shri (India) and Julia (Brazil), and the room that we were sharing with had Franny (Chile), Sneha (India), Gigi (Canada), and Juliana (OR, USA). We were all really happy to be together!

After settling in a little bit we all hung our around the hotel catching up with everyone since we hadn’t see each other since the end of September. Sadly for this meeting we were split up, so we didn’t get to see the kids living in Slovakia.

Once everyone had arrived we all walked together to the restaurant for dinner. We had cordon bleu with green beans, and after we got cake. After dinner we walked back to the hotel to begin our language testing.

The first part of the language test was a three page written exam. We translated, wrote sentences and paragraphs as well as some reading. After that test was over we moved on to getting ready for the speaking test.

The speaking test was definitely causing everyone lots of anxiety. Basically we all sat in a room together and got our names called randomly one by one. When your name was called you would stand up and introduce yourself to everyone including rotex and Barak. Then they would ask you random questions and you had to try to answer. After a few questions they would tell you that you were done and they would move to the next person. I was happy that I understood pretty much every question and answer that people said. When it got to my turn I didn’t under stand the first couple of questions, so they gave me some easier ones. The speaking test took around three hours and we didn’t didn’t start until 9 in the evening so we finished around 12 or 12:30. Curfew was moved to 12:45, but we stayed up in our rooms a little bit talking about the test and how we thought we did.

The next morning we had to wake up at 6:30 to get ready for breakfast at 7 that was served at the hotel. After breakfast we got our things together for the day and we left around 8:30. We all squeezed onto a tram to the city center. I was amazed that all 47 of us and all of the rotex made it all onto the same tram that was already pretty full. When we got off the tram we met our tour guide for the day.

The tour guide took us all around Prague for 7 hours. We went to the castle, some churches, the Charles Bridge, and some amazing viewpoints. We also visited the John Lennon wall where we spent some time making our own marks on the wall with markers and spray paint. In the afternoon after lots of walking and lots of pictures they let us go around one of the smaller Christmas markets and into the mall to have some lunch. I had lunch with Juliana, Kat, Ryan, and Polina. After we were done with lunch we went shopping around the mall. When it was time to go we all went out front to meet up with the group and continue with our tour of Prague.

Next we went to the old town square for the giant Christmas market. They gave us an hour and a half which felt like too much time since we had already been out for so long. Most of us were starting to get cold, and tired of walking. As soon as we were released into the market Juliana and I immediately lost track of everyone. We walked around looking for people for awhile, but were unsuccessful. We ended up finding a somewhat sheltered place and just hung out. Later a rotex came up to us and asked if we had seen anyone because she had lost everyone too. We hung out together for a bit and then walked around trying to find others. Eventually we ended up at the astrological clock with a few other students when it switched hours.

When our time was up we all went back to the meeting place so that we could go to the restaurant for dinner. There we had svičková and we shared some cake. After dinner we went back to the hotel to get our gifts and sweets ready for our Christmas party. I had to quickly package my present and we went down for the party.

We all set our Christmas sweets from around the world on the tables, and our presents around the mini tree. Then we went into the other room for a presentation about the traveling rules.

We had all realized that it was Barak’s birthday that weekend, so after the presentation we had a surprise fo him. We made him a video with each of us saying happy birthday in our own language. Julia edited it and put it together and we showed it to him on the projector. At the end of the video was a three second count down and we all yelled happy birthday in Czech. He was really happy and so were we.

Once we were done we went back to start our Christmas party. First the rotex sang us some Czech Christmas carols. Next was secret santa. It was more of a white elephant game, but it was still fun. I got a fuzzy blanket with reindeer on it. We also got shirts from rotary that say “I <3 Ježíšek” (“baby jesus”=Czech santa).

After the secret santa it was finally time for us to preform our Christmas carol that we were supposed to have learned. We got into groups of around 8 people and they called us up randomly to sing the song as best as we could with the most original performance. My group barely knew a single word, and we ended up laughing so hard at how bad we were doing that we didn’t even finish the song. Some other groups actually did pretty decent and I was impressed, but not surprised because my friends and I forgot to really learn it before the meeting.

Next we did a Czech tradition where everyone gets half of a walnut shell with a birthday candle glued into it. Then we got around bowls of water and lit our candles before setting our “boats” into the water. Supposedly it’s your “life boat” and it represents what will come in the new year for you. For example if you and another “boat” end up sticking together then you will stay close in the following year. You really don’t want your boat to sink, and thankfully none of ours did.

After that celebration we started eating our sweets and listening and singing to Christmas music for hours. We had fun enjoying our last night together before the holidays.

After the party we got our language test scores back before we went to bed. I got okay scores, but not anything special. Most people didn’t do well on the speaking tests and I think a lot of it had to so with people being super nervous. Overall I was happy with my score though. We ended up staying up until 2 or 3 in the morning after all of the partying and hanging out.

Sunday morning we were all feeling super exhausted of course. Somehow my room was the first to breakfast, but we barely even ate because we were so tired. Slowly more and more people came down looking just as tired.

After breakfast we did another pin exchange for all of the late arrival students as well as exchanging some favorite snacks from our home countries.

Then people started leaving little by little in groups depending on when their trains left. My group was the last group, since we had a late train. While we waited for our train we ended up helping Jayson look for his phone that he had lost.

On the train ride home we snacked and chatted about the weekend. We had reserved seats on our way back and it was much better.

When we finally arrived in Brno we said goodbye to Shri who was getting picked up by her mom, and then we all went to the little mall to meet Gigi’s host sister in-law. We had some pizza with her and then we went shopping a bit. After our long weekend we were all exhausted, so I took the bus home and fell asleep not long after arriving home.