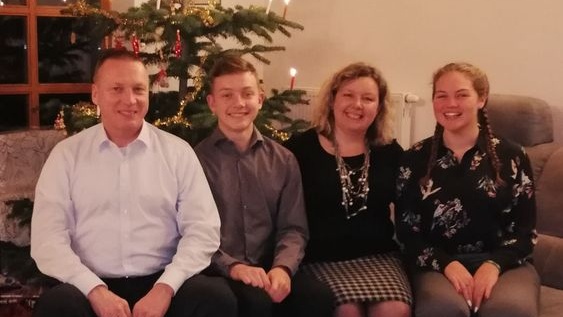 Sunday morning we slept in until almost 10:30. We got up for a little breakfast before we continued unpacking and cleaning up from the ski trip. Starting after breakfast and going until late in the evening, we baked seven vanočky. I helped make bits of each one, but there was a lot of rest time in between each step. We also finally decorated all of our gingerbread cookies. We started out slow and tried to make them look good, but by the end we were just squirting frosting all over them. I even got my host dad to decorate some cookies, which was something he hadn’t done!

We had a small lunch in the middle of all of our baking. Later in the evening while our last vanočka was in the oven we had some dinner. When all of the vanočky were done we put them all in a couple of bags and got dressed to go out. It was around 10:30 at night as we set off around the village. Our first stop was our neighbor, we gave them one vanočka and wished them happy holidays before moving on. Next was Dana and Karl’s house. We gave them a vanočka and chatted with them for awhile before wishing them happy holidays. Then we moved on to Dita and Miloš’s. We continued our pattern of giving a vanočka and wishing happy holidays. We had one last stop before heading home. After giving out half of the vanočky we went home and went to bed.

The next morning was Christmas Eve!! We slept in until about 10. On Christmas Eve you are supposed to fast all day or at least not eat meat until the big dinner feast. We weren’t all going to make it without food, so we had vanočka for breakfast.

After breakfast I wrapped my gifts for the family. Then Ruda, Robert, and I went out to our backyard to get our Christmas tree. We took the last Christmas tree they had grown. It took awhile to cut it down and to trim the trunk so that it would fit in the stand. Once it was finally ready we carried it in and Ruda and I started decorating. Some families here don’t use Christmas lights and instead use candles to light the tree. We only had 8 candle holders for the tree but we made it work.

After the tree was decorated I set to work in the kitchen with Zora. Potato salad is one of the big parts of the holidays here. Each family has their own special recipe that gets handed down through the generations. We were making Robert’s family potato salad for our Christmas.

After the potato salad was made we all went to the living room to play some games together. It took me awhile to figure the game out since it was a lot of Czech, but I managed to do okay. After a couple of rounds it was time to get ready for dinner.

I decided to take a quick shower and braid my hair so that it looked nice. Then we all dressed up in nice clothes for our family picture and for dinner. I put on some slacks and a new blouse. Once we were all ready we went to the dining room for dinner.

Dinner was started off with a toast to the holidays. Then we sat down and started the meal with some fish soup. The rule for Christmas dinner is that nobody is supposed to leave the table except the cook (mom) who is serving the food. So once we were done with our soup, Zora got up to serve the main course. We had breaded fish and our potato salad for the main course. Traditionally people eat carp and the potato salad, but my host family doesn’t really like carp so we ate a different fish.

Once dinner was over and everyone was completely stuffed, we went to the living room for our family photo. We sent the family pictures to the rest of the family and most of them agreed that I looked like a relative! After taking a few pictures it was time for presents.

Ruda and I took turns passing out presents to everyone and then we would all open them together. I got a 600 page Czech cookbook which was something that I really wanted. I was so excited to be able to cook out of it when I go home. I also got some gloves, chocolate, and lotion. After all of our presents were opened we played with all of our new things and hung out together.

Once it was almost 10 we got our jackets and walked down to the main square of the village to meet up with some other people for some unorganized Christmas caroling. We all hung out and sang a few songs and then we headed back home around 11.

Christmas morning we woke up kind of early for breakfast. Then we got dressed in nicer clothes and we drove to the city early so that we could stop at the cemetery before lunch with the grandparents. We went to both of the family spot’s that are for Zora’s side of the family and lit some candles. Then we drove to her parent’s house.

For lunch we had soup and a delicious roast with rice that grandpa made. We had lunch with Zora’s sister and her family who I hadn’t seen since grandma’s birthday.

After lunch we moved on to presents from the grandparents. They got me a gift card to one of the stores here, and a couple of other little things. After opening our presents we Skyped Jerry (my older host brother in the US this year).

After lunch we went to visit Zora’s 95 year old grandma, making her my host great grandma! We also met Zora’s aunt too. We chatted for awhile before saying goodbye and making our way home.

When we got home we followed their tradition of watching a movie together over the holidays. We watched the Czech cinderella together with English subtitles. Then I went to bed.

The morning after sleeping at Shri’s house we had to get up early because they were going on a trip. We were supposed to wake up at around 5:15, but I overslept
Read More 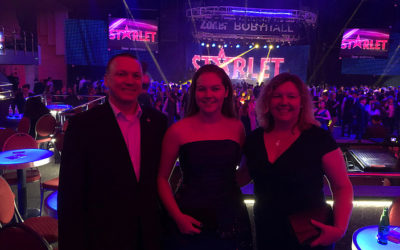 Austria Recovery, and My Second Ball

The day after we got back from Austria (Wednesday) we slept in until 8:30 or 9 before having breakfast. After eating we started laundry, and cleaning up from
Read More 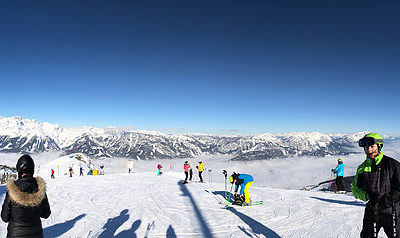 Saturday morning I was happy to wake up at 8 to go for bread because I could barely sleep anyways with all of the excitement about going to Austria. When I got
Read More 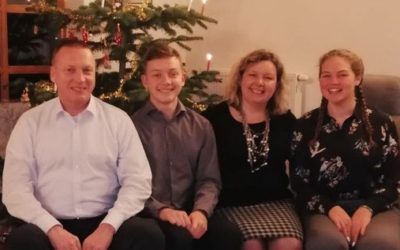 Sunday morning we slept in until almost 10:30. We got up for a little breakfast before we continued unpacking and cleaning up from the ski trip. Starting after
Read More 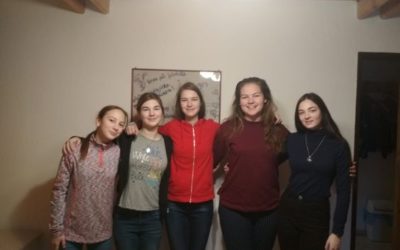 Week Sixteen of School and My First European Ski Trip!

Monday morning I woke up a little later, like usual, and went to Robert’s work for breakfast. Then I got on the bus and made my way to my Czech lesson. It had
Read More 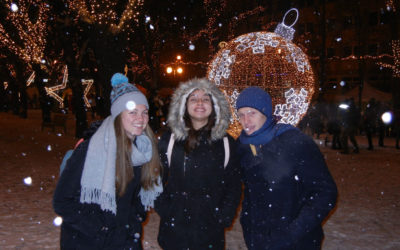 Friday morning I woke up at my usual time and went to the city with Zora. I went to her office to gather my things and to get ready to go on the train. For the
Read More 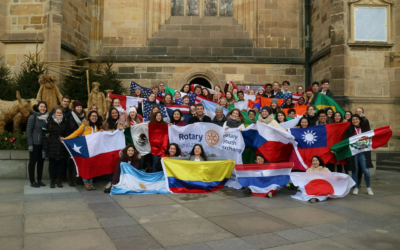 As lunch began on Friday at school, Shri and I got our things together from school and walked to the tram. On our way to the train station to meet the others I
Read More 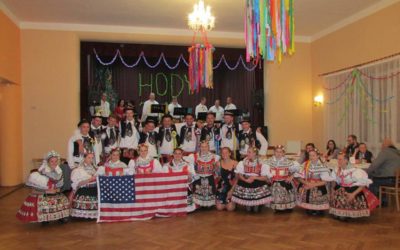 On Friday, there was no school for the Czech St. Wenceslas day holiday. Ruda and I slept in for awhile before getting up and finding something to eat. In the
Read More