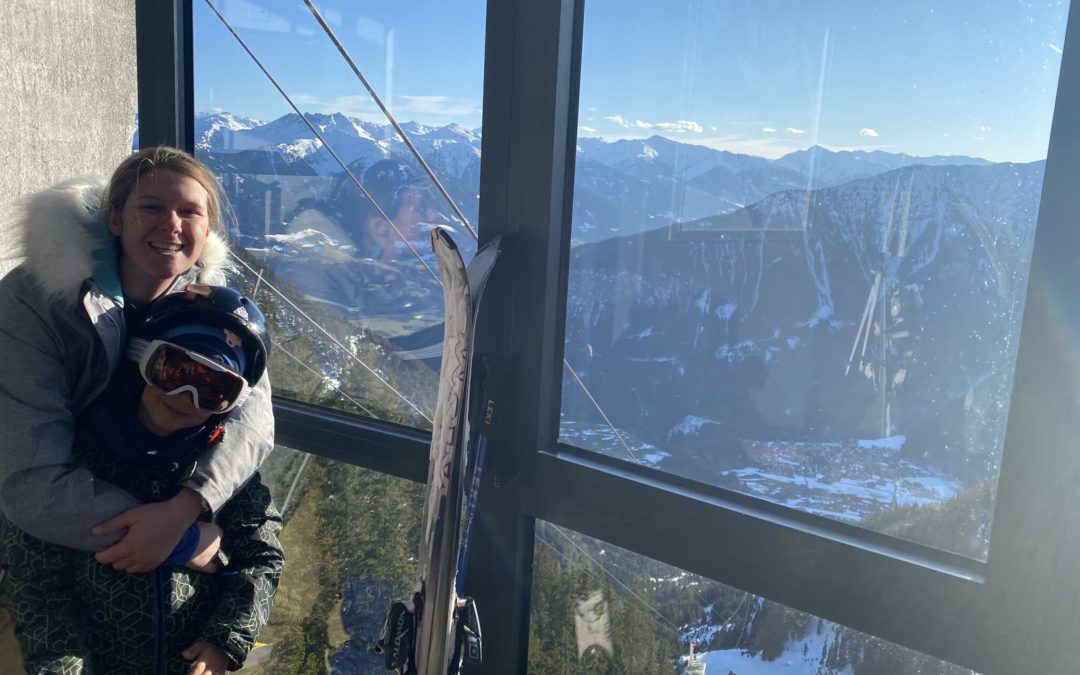 This Spring holiday from 14 February to 23 February, I had the amazing opportunity to join my host family in Austria for a week – mainly to ski. Our trip began on Friday afternoon with a four hour car ride, the limit for one-year-old Karolina and two-year-old Stepan. After staying at a really cool three story house just across the Austrian border for one night, we continued the car trip for another four hours to the small city of Pertinau. Once the car was unloaded to the rented flat, located only a five minute walk from the gondola to the mountain top, we all went on a walk: my host mom and dad, Eva and Dan walking and talking with Karolina and Stepan in a double stroller while my seven-year-old host brother Lukas and I ran around throwing snow until we got tired. After ordering fresh bread for the next morning and eating a quick dinner we all went to bed, exhausted from travel and unpacking.

Sunday morning everyone was up by 7:30, apparently nobody was eager to sleep away the first day of vacation. Lukas retrieved the bag of fresh bread from the front desk and we had a great Czech/Austrian breakfast of fresh bread with butter, ham, and cheese. By 9 am Lukas, Dan, and I were on our way to ski. After a short stop at the sports store to rent gear and the ticket office for lift cards we were off. The three of us skied until 12:15, then Lukas and I went for lunch while Dan went to relieve Eva from taking care of the little ones. After an hour and a half or so of waiting, we went out to ski once more. This time I didn’t stay with Eva and Lukas the whole time, instead going wherever I wanted and skiing with them when I saw them on the runs.

The next day followed in this routine once more, but on the third day multiple disasters struck. On Tuesday morning Dan found out he would have to return to Brno for a meeting and would return Wednesday evening. He was able to ski with me and Lukas for about an hour before trading with Eva to watch the little ones and prepare to leave. At noon, Lukas decided he was too tired and sore to ski anymore and all he wanted to do was go say goodbye and spend some time with Dan. Eva, however, knew the time she had to ski that day was limited to the time it took Dan to pack up and wanted to get as many runs in as she could, so I offered to take Lukas down and she could ski a few runs. After Dan left, Eva and Lukas went back to the flat for a couple hours while I continued to ski – I wanted to ski the rest of the day, but it was Eva’s vacation too and it didn’t seem fair to make her babysit the whole time, so I returned early and offered to stay with the little kids while she and Lukas went back out to ski.

For about a third of the time they were gone both Stepan and Karolina continued napping. Then Karolina woke up. She was easy enough to take care of and everything was going fine. About an hour after Karolina woke up, Stepan started making noise, so I went to check on him. He said he wanted to sleep more, so I let him be for another 45 minutes or so. At that point, I was expecting Lukas and Eva to arrive back home in only 30 minutes or so and it was getting late enough that I was worried Stepan wouldn’t want to sleep later, so I went back in and convinced him to get up. Taking care of a one-year-old who’s pretty content and quiet if you pay attention to her was easy. Adding the two-year-old boy who just wanted to throw toys, push over his sister, and play on the ipad he wasn’t allowed to touch was a disaster. I quickly started feeling relieved he had slept so long and Eva would be back to control him soon. Until she was an hour late.

Instead of skiing, Eva and Lukas got a toboggan and went tobogganing – something Lukas had never done and Eva had not done in a long time. On icy runs. It ended with a crash that hurt Eva’s knee, and they spent most of their time trying to get down the rest of the hill and back to the flat without hurting it more. Regardless, with Eva home most of the rule-breaking chaos stopped. For the next day and a half, I mostly stayed in the flat and did whatever I could to help – make dinner, set up breakfast, make lunch, take Lukas and Stepan with me to the store so Karolina and Eva could take naps, etc. That evening, Dan arrived back and we had a calm night. The next day was our last day to ski, and Dan and Lukas found a different resort only five minutes away we could go to, so that day I got to ski at a different resort. We had lots of fun. The next morning we packed up all of our things and prepared for the journey home before relaxing and just playing around. Finally, the next morning, we began our trip home, once again stopping halfway for the night and continuing on in the morning. 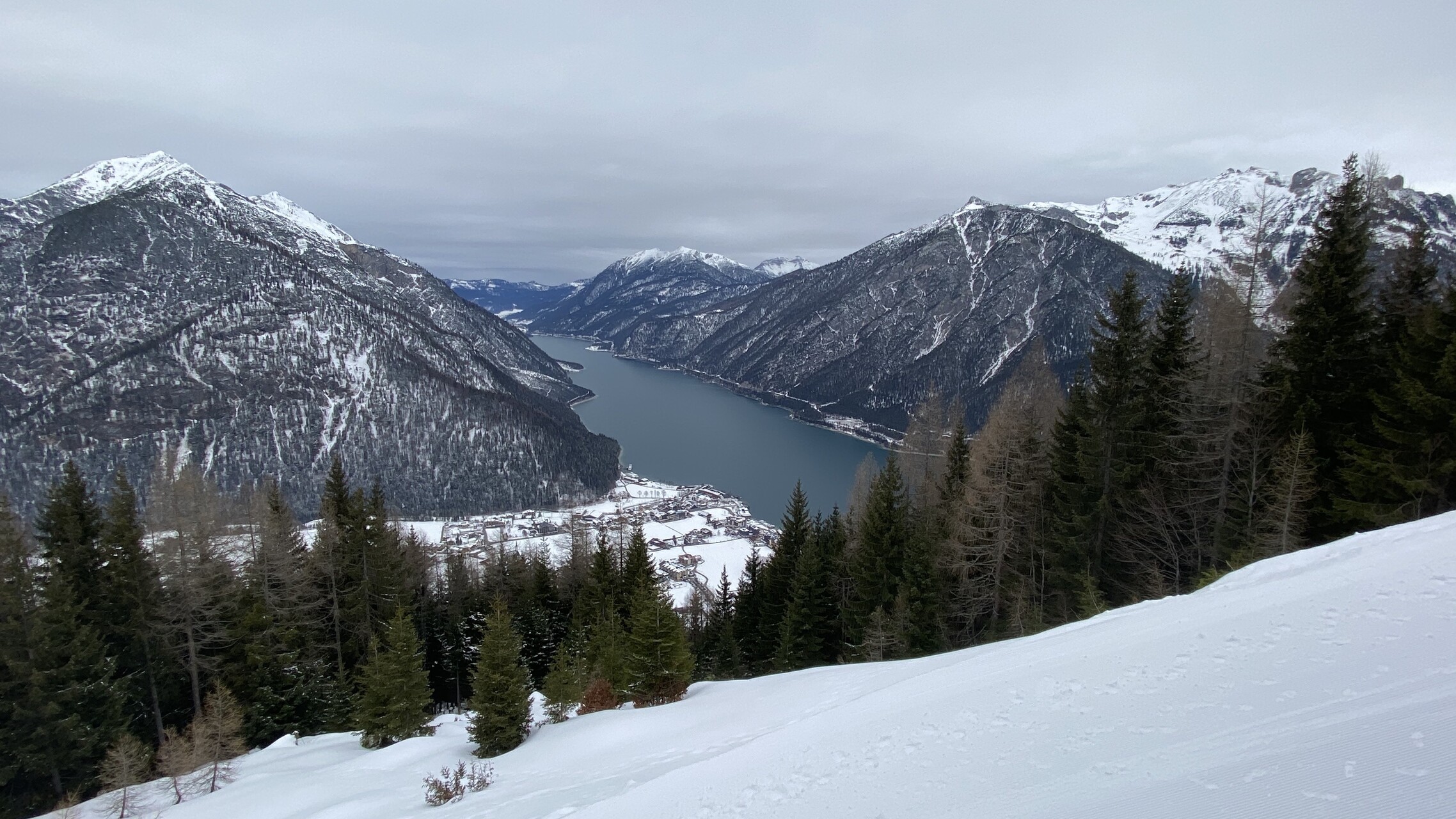