Czechs and Slovaks can easily understand each other. Polish is also very similar to Slovak, some words can be understood by slovaks. 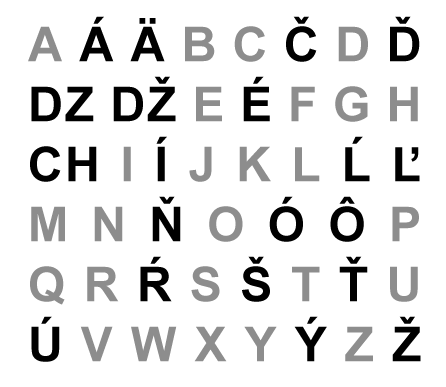 Slovak language uses Latin alphabet, certain letters in certain circumstances have diacritics: ˇ, ´, ¨, ^ above them. Most letters (without any diacritics) are pronounced more or less the same as you read it.

The acute mark (or prolongation mark) indicates a long vowel, for example: í = ee. This mark may appear on any vowel and it may also appear above the consonants l and r (which, in such cases, are considered vowels).

The circumflex exists only above the letter o. It turns o into a diphthong, for example: “ôt” is read as “what”.

The umlaut (two dots) is only used above the letter a. It indicates a raised vowel, almost as “ae” in Vanessa Mae.

The caron (palatalization mark or softener) indicates either palatalization or a change of alveolar fricatives into post-alveolar, in informal Slovak linguistics often called just palatalization. Eight consonants can bear a caron.

Slovak Alphabet is basically the same as English, both use the so-called Latin alphabet, however some letters are with diacritical marks.

Using Other Languages in Slovakia

If you speak Czech, you may freely use this language in all communication, most people will understand what you say. Most likely they will answer in Slovak as it is usual in a Czech-Slovak conversation. That’s why, if you are not native Czech and have only learned the language, you may encounter some problems with several (actually quite a lot of) words which are different in Slovak and these you will not even find in your Czech-Whatever dictionary. The Czech natives understand them only thanks to the fact, that for several decades, there was a common Czechoslovak television and therefore they had the possibility to get used to the Slovak language. Czech youngsters born after the split, have problems understanding Slovak as well.

In Southern Slovakia many people understand Hungarian, so if you enter a shop, the assistant will greet you in both languages and will continue to converse according to your preferences. Same situation exists near the Polish and Ukrainian borders, the only difference is that Polish and Ukrainian are somewhat similar to Slovak, while Hungarian is not at all related to Slovak.

Using English you may talk to most young people (10-35 years old). Older people (mostly businessmen and other people who work in travel and commercial services, as well as people in larger cities) speak it also, to varying degrees.

How to learn Slovak

Lower at this web page there are two links to Slovak e-learning courses, which we consider the best among those which are free. We strongly recommend to choose at least one of them and to regularly use it for your studies. You can certainly find other on-line courses on the Internet.

There are also some links to Youtube channels of Slovak videocourses. These are mostly the introductory lessons of multi-lesson courses. Of course there are other on-line video courses as well.

If you wish to have a real text book, there is a great offer on https://www.amazon.com/ for example. 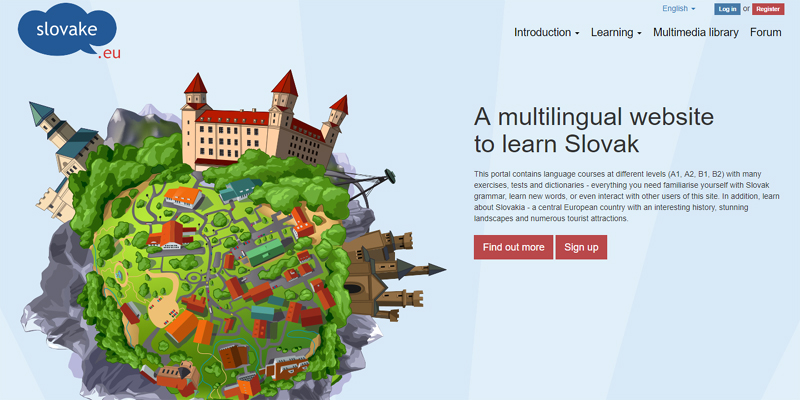 This portal contains language courses at different levels (A1, A2, B1, B2) with many exercises, tests and dictionaries – everything you need familiarise yourself with Slovak grammar, learn new words, or even interact with other users of this site. In addition, learn about Slovakia – a central European country with an interesting history, stunning landscapes and numerous tourist attractions. 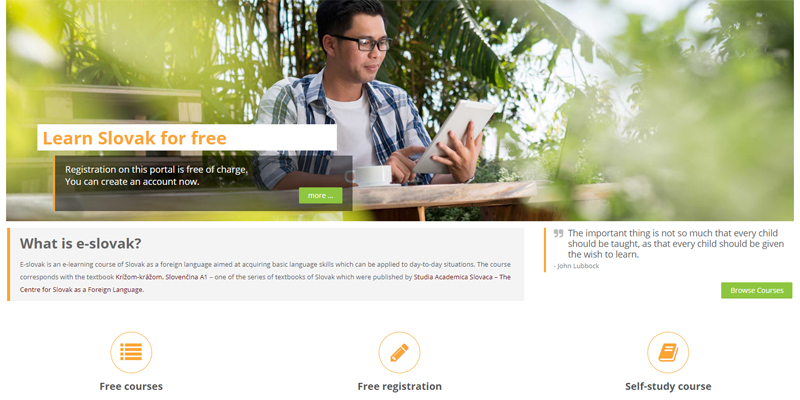 E-slovak is an e-learning course of Slovak as a foreign language aimed at acquiring basic language skills which can be applied to day-to-day situations. The course corresponds with the textbook Krížom-krážom. Slovenčina A1 – one of the series of textbooks of Slovak which were published by Studia Academica Slovaca – The Centre for Slovak as a Foreign Language.